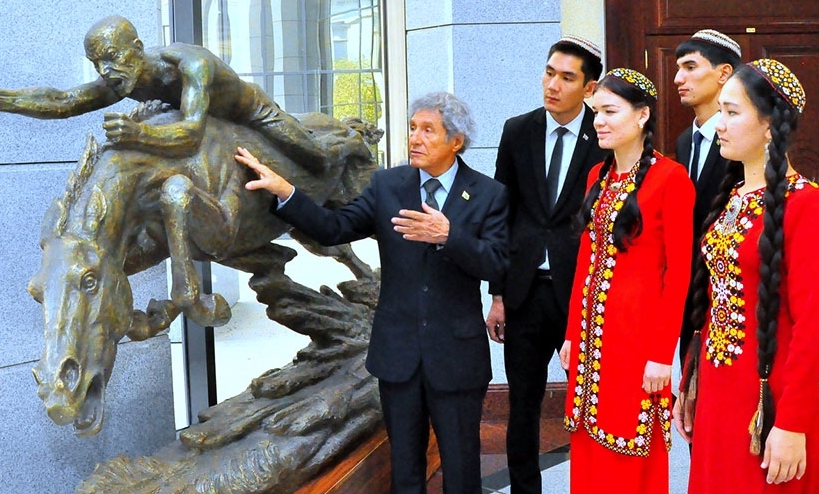 On November 15, 2021 the Turkmen sculptor, Honorary Member of the Russian Academy of Arts Babasary Annamuradov is marking his 80th jubilee.

If you try to give his work a kind of universal definition it may sound something like a singer of the perfect world - the world, that is approaching harmony in its structure. With the help of Babasary’s hands the tree sang – the melodies of the fibers are intertwined with the lines sung by the artist – natural lines-images intersect with the images created and the sculpture exudes warmth. The large, monumental form, on the contrary, often places the viewer after the author in an unthinkable position of the Almighty who anxiously and hopefully observes our planet from Space. The world created by Babasary Annamuradov – the holder of many honors and awards is fragile and far from being ideal. This world through a series of epochs is experiencing natural and man-provoked collapses to be reborn again and again each time becoming at least a little, but different.

The Presidium and President of the Russian Academy of Arts Zurab Tsereteli have congratulated Babasary Annamuradov on his 80th Jubilee:
“The People’s Artist of Turkmenistan, Honorary Doctor of the Turkmen Academy of Arts you present the art of your country with dignity. Having been born in the very beginning of the War in 1941 you have made your way to art through many horns and trials, perfected your skills in easel works of many genres and in various materials. A deeply folk sculptor going from the national to the universal you have become the author of the Memorial Complex in Memory of the Fallen in the Great Patriotic War in Ashkhabad, Memorial to Victims of the Earthquake in 1948, a series of monumental compositions, dedicated to prominent figures who glorified Turkmenistan throughout centuries, as well as sculptural images that adorn the cities of your homeland.

The unique shade of the national identity of your works, your extraordinary approach to understanding life have been appreciated not only in Turkmenistan, but in many countries of the world. Your works can be seen in collections of major museums of Ashkhabad, Moscow and other cities, as well as in noted private collections.

The Russian Academy of Arts highly appreciates your contribution to the development of cultural ties between our nations. You have devoted many efforts to the promotion of young artists, successfully worked as the Head of the Artists’ Union of Turkmenistan. For your outstanding achievements in the national culture of Turkmenistan you have been awarded numerous orders and prizes.