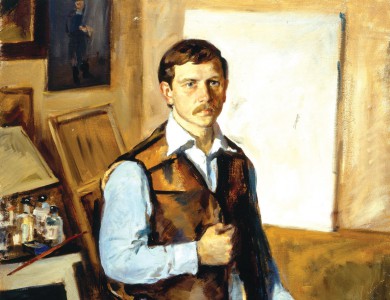 Leonid Gervits is a follower of the Old Masters’ painting tradition. He graduated fr om I. Repin St. Petersburg Institute of Painting, Sculpture and Architecture wh ere his skills were perfected by deeply-rooted European traditions of figurative art. After his post-graduate studies Leonid Gervits worked as a Professor of I. Repin Institute, in 1991 moved to the United States.


His works have been exhibited worldwide from Japan to Spain, including Princeton University, Dow Jones Gallery, Gallery of the House of Medici (Zurich, Switzerland), Madison Gallery (New York) and other galleries and museums.

The Presidium and President of the Russian Academy of Arts congratulated Leonid Gervits on his 75th anniversary. The Letter of Greetings, in particular, runs:
“On behalf of the Presidium and staff of the Russian Academy of Arts I would like to extend to you our congratulations on your 75th anniversary!
The graduate of I. Repin St. Petersburg Institute of Painting, Sculpture and Architecture, in your professional career in many ways you have remained true to the Russian school of portrait art. You have been a multiple winner of the New York, All-American and international portrait contests. Besides your vast exhibition activity in New York, Washington, Germany, Russia, Spain, Israel, Japan, France, you have shared your experience at I. Repin Institute in St. Petersburg, the Academy of Figurative Arts in New York and continue teaching in the Art Students League of New York – the US oldest art educational entity. The Russian Academy of Arts highly appreciates your bright creative palette, extraordinary talent and brilliant professional skills.
We wish you creative longevity, inexhaustible thirst for life and new achievements”.