EAST IS EAST: THE RETROSPECTIVE OF THE HONORED ARTIST OF RUSSIA ALEXANDER MICHRI AT THE RUSSIAN ACADEMY OF ARTS 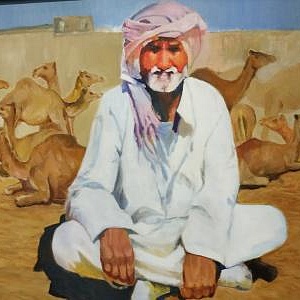 Venue: Exhibition halls of the Russian Academy of Arts

SEE THE PHOTOS IN THE RUSSIAN VERSION OF THE SITE

Alexander Michri was born in Baku in 1934, graduated from S. Stroganov Moscow State Academy of Arts and Industries in 1961.  His career as an artist   started in Central Asia. He was enchanted by its extraordinary nature and hospitality of its people. Since the early 1960s the East has been the artist’s favorite source of inspiration.

The exhibition features canvases depicting land- and cityscapes of Tunisia, Jordan, Israel, Egypt, countries of Central Asia as well as portraits of people in national clothes, genre scenes. The artist’s works are in museum collections in Russia and other countries. Internationally recognized are the cycles of his pictures and graphic works produced in recent years and exhibited in many cities of Russia, Germany, Austria, China. For his significant contribution to the promotion of art Alexander Michri has been presented with numerous orders and awards.

The artist’s creative biography is closely connected with his public activity. For many years he has been elected as Vice-President of the Creative Artists’ Union of Russia. Enormous is his contribution to the organization of major international traveling art exhibitions under the auspices of the State Duma and the Council of Federation of the Federal Assembly of Russia such as ‘Russian Artists to the World” (2006-2012). From 2016-2019 Michri initiated and headed the large-scale  project “The Crimean Bridge” involving artists from Moscow, Crimea, Kuban and other regions.