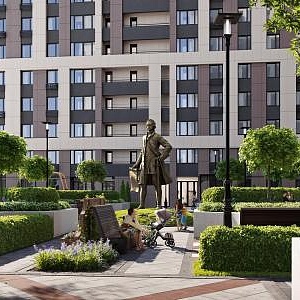 On February 20, 2020 at the Museum and Exhibition Complex of the Russian Academy of Arts there was a presentation of the sculptural composition “Peter the Great” by the President of the Russian Academy of Arts, UNESCO Goodwill Ambassador Zurab Tsereteli. The 6m tall bronze sculpture will be placed in Yunnatov street in the Savelovsky district of Moscow.

In 2022, Russia will mark the 350th anniversary of the first Russian Emperor Peter I – reformer and enlightener who radically changed the state system of Russia. In accordance with the edict of the President of the Russian Federation Vladimir Putin this date will be celebrated by major events in many cities of Russia.

“The sculpture is to be installed as part of the implementation of the Project for Petrovsky Park Complex Improvement. The monument to Peter the Great will be a symbol and guardian of the Complex. The historical environment of the residential complex “Petrovsky Park” has found its reflection in the color design of facades. There will also be recreated an atmosphere of gardens of Peter I’ time and we very much appreciate that this sculpture created by Zurab Tsereteli will become a centerpiece of the Complex territory” – said Tatyana Tikhonova.