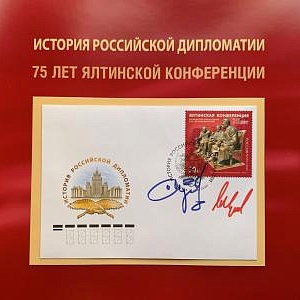 On February 10, 2020 in the Foreign Ministry Mansion there was a ceremony of the postage stamp cancellation in honor of the 75th anniversary of Yalta Conference . The jubilee stamp depicts “The Big Tree” monument by the President of the Russian Academy of Arts Zurab Tsereteli placed on the territory of the Livadia Palace (Yalta) on February 5, 2015.

The monument has been presented by the sculptor as a gift to Russia. The preservation of historical memory through art and immortalization of images of outstanding people of the world and key events of world history are one of the main directions of the creative work of the People’s Artist of USSR and Russia Zurab Tsereteli.

The ceremony was attended by the Minister of Foreign Affairs of the Russian Federation Sergey Lavrov, Head of The Federal Agency of  Communications O.G. Dukhovnitsky, President of the Russian Academy of Arts Zurab Tsereteli, members of the Federal Council of RF, diplomats, representatives of Russian and international mass media. The attendees also got acquainted with the exhibition of documents from the Archives of the Foreign Ministry dedicated to Yalta Conference.

The circulation of the stamp with a nominal value of 50 roubles is 90000 copies. The stamp was extinguished with a special souvenir mark. The stamp will go on sale on February 11, 2020 and will be included in philatelic catalogs.