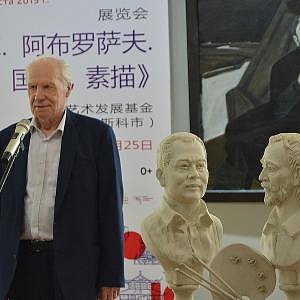 Timed to the 70th anniversary of the resumption of diplomatic relations between Russia and China, the 10th Russian-Chinese Culture and Art Fair is being held simultaneously in the Russian city of Blagoveschensk and Chinese Heihe City.

“As you know, 2018 and 2019 have been declared the years of cooperation between the regions and this festival is one of the symbols of such partnership…

Ten years ago, it was quite a small fair between the two cities, but the cultural cooperation between our nations continues to develop and the festival has become part of history of the Russian-Chinese friendship. This year, its 10th jubilee coincides with the 70th anniversary of the resumption of diplomatic relations between the two countries. Today, these are not only relations but a real strategic partnership in which culture and art play an important role “ – quoted the Deputy Culture Minister Olga Yarilova the words of the Letter of Greetings by the Russian Minister of Culture Vladimir Medinsky at the opening ceremony. The attendees were also welcomed by the Governor of the Amur Region Vasily Orlov.

The program of the events in Blagoveschensk includes nine exhibitions presenting the art of leading Russian artists, unique works by Chinese masters, as well as works by young artists.

The G.S. Novikov-Daursky Amur Regional Museum of Local History (165 Lenin Street, Blagoveschensk, Russia) for the first time hosts works by the Academician of the Russian Academy of Arts Igor Obrosov (1930-2010) featuring the master’s 50 paintings and graphic sheets. Igor Obrosov was a teacher of the noted Amur Region artist Alexander Tikhomirov.