WITH LOVE TO RUSSIA, IN SERVICE TO ART: MEMORIAL EVENT IN HONOR OF THE 200TH BIRTH ANNIVERSARY OF THE GRAND DUCHESS MARIA NIKOLAEVNA 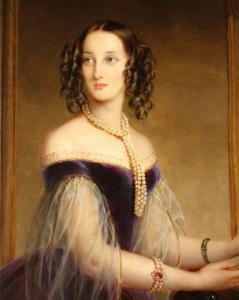 The Sergi Memorial Foundation and Women’s Orthodox Patriotic Society under the auspices of the Russian Academy of Arts have organized a number of memorial events to be held in Moscow and St. Petersburg in honor of the 200th birth anniversary of the President of the Imperial Academy of Arts Grand Duchess Maria Nikolaevna.

The memorial event at the Russian Academy of Arts (21 Prechistenka street, Moscow) will take place in the White Hall on May 31, 2019 at 16.00. The moderators are PhD in History, Head of  the Sergi Memorial Foundation, Honorary Academician of the Russian Academy of Arts, writer Dmitry Grishin and PhD in History, Head of the Women’s Orthodox Patriotic Society, writer Galina Ananyina. The event will be accompanied by the piano music to be performed by the soloist of the Moscow State Conservatory Mickhail Mishin.

The Great Duchess Maria Nikolaevna (1819-1876) - daughter of the Emperor Nicholas I and sister of the Emperor Alexander II – was the President of the   Russian Imperial Academy of Arts in 1852-1876. She made a great contribution to the Academy’s exhibition activity, obtaining masterpieces for the Academy’s  collection, development of its new Charter, sponsorship for young artists, establishment of the class for Orthodox icon painting, creation of an asylum for poor artists.

For many years she headed the Society for the Encouragement of Artists. She provided several rooms for the Society in her palace and later achieved its allocation in a separate house in the downtown of St. Petersburg. The Grand Duchess also set up an art school on her own with a library, studios and museum.

One of the aims of the memorial events this year is a revival of the tomb of the Grand Duchess Maria Nikolaevna in the burial place of St. Peter and Paul Fortress destroyed in the Soviet time.