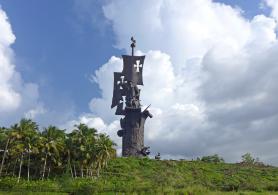 The construction of the majestic 268 feet tall Birth of the New World monument is being completed in Arecibo, Puerto Rico.  The Birth of the New World monument by the world renowned sculptor, People’s Artist of Russia, President of the Russian Academy of Arts Zurab Tsereteli is one of the two-piece sculptural concept dedicated to the 500th  anniversary of Christopher Columbus’s  historical sail to the shores of America.

On June 14, 2016 Zurab Tsereteli had a meeting with the authorities and representatives of the business circles of Puerto Rico, engineers and workers involved in the monument’s construction, pressmen.

The Birth of the New World monument is installed on the Northern coast of Puerto Rico in the town of Arecibo. Standing tall and facing the same waters once navigated by Columbus himself, it welcomes visitors across the globe arriving by air and ship to Puerto Rico and is expected to be one of the major tourist attractions on the island.

The first 45m tall monument entitled “Birth of the New Man” was erected in Seville (Spain) in 1995 – the starting point of Columbus’s voyage.