THE IMPERISHABLE LEGACY: EXHIBITION PROJECT IN THE MUSEUM AND EXHIBITION COMPLEX OF THE RUSSIAN ACADEMY OF ARTS 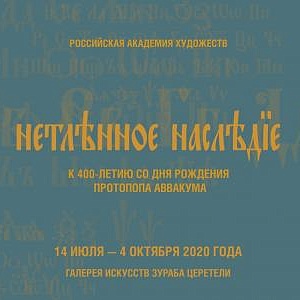 Avvakum Petrov  (1620-1682), son of the priest from the village of Grigorovo near Nizhni Novgorod  has been distinguished by uncompromising beliefs and strict spiritual life. In other historical situation he would have been revered as a zealot and ascetic, but in the middle of the 17th century there was a necessity in editing liturgical books as they differed from each other and did not correspond to the Greek originals. The Archpriest Avvakum and his supporters claimed to correct books according to old Russian manuscripts and while Patriarch Nikon - according to Greek editions printed in Italy. This contradiction marked the beginning of the schism of the Russian Church. Having endured repeated exiles and imprisonment in Pustozersk on the Pechora river,  Avvakum did not renounce his beliefs and was burned.

He is credited with 43 works in which he preached his views. His colleagues despite severe repressions laid the foundation for the powerful spiritual direction opposite to the official Church. The exhibition shows the history of the Old Rites Church including the old believers who accepted the priesthood and those who did not accept it.

The exhibition features many aspects of this vast and complicated phenomenon. Old believers actively promoted book and music culture, engraving, art casting and icon painting. The emphasis has been made on various old believers’ icon painting centers. Every school is represented by several illustrative works provided with detailed explications. The centerpieces of great artistic impression are three large icons: Christ Pantocrator (The Lord Almighty) created before the schism or in its early years (collection of V.A. Bondarenko); St. John the Forerunner Angel of the Desert and St. Metropolitan Alexis in his life from the Nativity Church of the Rogozhsky cemetry in Moscow. Also unique are original books from the collection of the Moscow Metropolitan of the Russian Orthodox Old Rites Church and private collections, photographs and other items that characterize the history and everyday life of Russian old believers.