#THREE PROJECT: EXHIBITION OF WORKS BY THE PRESIDENT OF THE RUSSIAN ACADEMY OF ARTS ZURAB TSERETELI IN THE UNDERGROUND MUSEUM OF ZARYADIE PARK 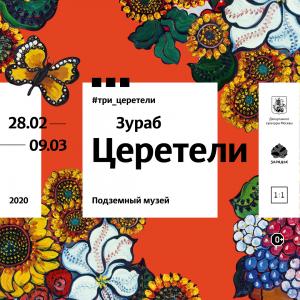 The Underground Museum of Zaryadie Park presents the exhibition of the Winner of Picasso Prize, UNESCO Goodwill Ambassador, President of the Russian Academy of Arts Zurab Tsereteli featuring the artist’s three pictures: “Seductive Rimma” (2008); “The Second Round” (2012); “At Tsereteli’s Picture” (2012). The multimedia section covers archive materials and a documentary film about the artist.

“Painting for Zurab is the beginning of all the beginnings”, - said Marc Chagall about Tsereteli. Today, the artist’s name is mostly associated with his sculptures,  Tsereteli’s monuments can be seen fr om Moscow and Paris to New York and Arecibo (Puerto Rico). At the same time, painting has always been an integral part of his work. “I see everything in color”, - the artist says about himself and these words are important for understanding of his works.

Zurab Tsereteli was born in Georgia and his deep knowledge of folk art was a basis for creativity. Since his childhood due to his uncle George Nizharadze he was surrounded by artists including Lado Gudiashvili who very much influenced his desire to be an artist. In the Tbilisi Academy of Arts Zurab Tsereteli studied under recognized masters of painting Joseph Sharleman and Vasily Shukhaev. In the middle of the 1960s Zurab Tsereteli went to Paris wh ere he visited studios of the most distinguished modernists of the 20th century including Marc Chagall and Pablo Picasso.

In 2020, the Underground Museum of Zaryadie Park has radically changed the direction of its activity and became a platform for showcasing the art of various times and styles combining the show of painting and sculpture with multimedia submersion into the biography of artists and historical context. The #Three project has been conceived as a kaleidoscope of changing exhibitions (2-3 weeks). The Museum has already offered to the public works by Aristarkh Lentulov, Alexander Vinogradov and Vladimir Dubosarsky.