NEONOMADS AND AUTOCHTHONS: SOLO EXHIBITION OF ANDREY ESIONOV IN FLORENCE 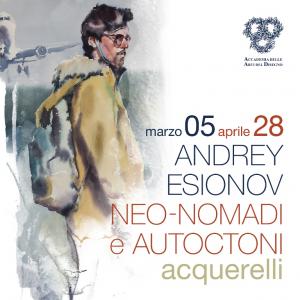 Venue: Exhibition hall of the Academy of Fine Arts

Curator of the Project: Alexander Borovsky

The Academy of Fine Arts in Florence presents works by the Academician of the Russian Academy of Arts Andrey Esionov (born in Tashkent in 1963). The “Neonomads and Autochthons” exhibition has been organized under the auspices of the city of Florence and the Region of Toscana. The title comes fr om the “Neonomads”  cycle of the artist’s works - analysis dedicated to the structural phenomenon experienced throughout the world: people in motion from large migration flows to mass tourism. The phenomenon  is being considered not by those who travel and migrate, but by a stranger capable to catch the nuances and paradoxes of this flow.

The exhibition, including 42 works from 8 watercolor series, shows changes and contradictions of the humanity in constant motion and is the first in the series of solo shows of Andrey Esionov in Italy, the second one will take place in Rome in   the museum of the Church of San Salvatore in Lauro (September, 2019).

Andrey Esionov was born on November 30, 1963 in Tashkent. In 1981 he finished his study as a graphic artist at the Republican Music and Art Boarding School and entered A. Ostrovsky State Theater and Art Institute in Tashkent wh ere he majored in easel painting. Andrey Esionov is a member of the Creative Artists’ Union of Russia and is an Academician of the Russian Academy of Arts. The artist is a holder of many honors and awards, as well as a participant of a great number of national and international exhibitions.