The Religious Enamels of Zurab Tsereteli: Exhibition in Chersonese 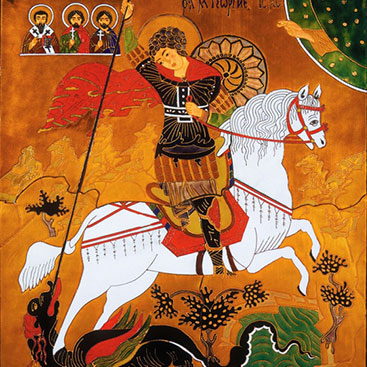 On June 12, 2017 at the State Museum-Preserve Tauric Chersonese there was an opening of a solo exhibition of Zurab Tsereteli “The Religious Enamels of Zurab Tsereteli” dedicated to the 260th anniversary of the Russian Academy of Arts. The exhibition features 40 enamels from the series “Biblical Theme” and a replica of the Good Defeats Evil monument depicting St. George the Victorious vanquishing a dragon.

The strength of character and amazing energy, the audacity of the experimenter and extraordinary artistic vision are portrait traits of Zurab Tsereteli who through his creative searches combined almost all the types, genres and techniques of fine arts. One of the artist’s most distinguished achievements was a rebirth of the ancient technique of a cloisonné enamel. The master raised the art of enamel fabrication to a higher level of quality. He enriched the color spectrum, introduced innovations in the production technology and created a new type – 3D enamels. The synthesis of elements of decorative art and the author’s picturesque and colorful gamma give his works a unique sounding.

The Biblical theme has been executed by Zurab Tsereteli in hundreds of his artworks, these are monumental bronze reliefs, monumental enamel panels, round sculpture, works of easel plastic, enamels. The works exhibited at the State Museum-Preserve Tauric Chersonese have been produced by the artist in the 1980-s – 1990-s. Their relatively small size gives the exposition a touch of chamberness. It is like a confidential conversation of the master with the viewers on eternal themes.