Spanish Suite: Exhibition of Works by Zurab Tsereteli in the Kaluga Music House 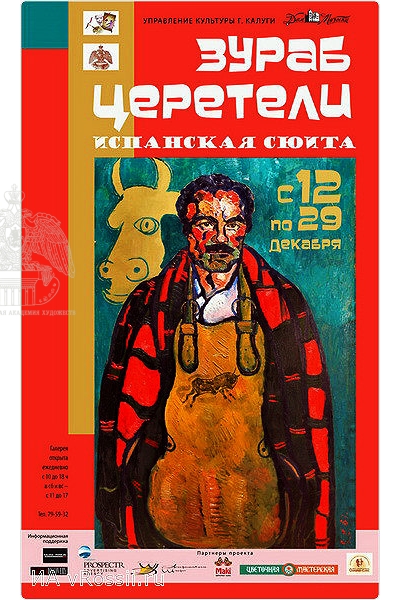 12 December – 29 December 2013
The Kaluga Music House: 6 Kirov street, Kaluga, Russia
The Kaluga Music House presents a Spanish Suite exhibition of Zurab Tsereteli, President of the Russian Academy of Arts, UNESCO Goodwill Ambassador, Member of the Public Chamber of the RF, People’s Artist of the USSR and the Russian Federation.
Organized by the Kaluga Department of Culture, Kaluga Music House and Russian Academy of Arts the exhibition features almost thirty paintings and several sculpture works. The opening ceremony was attended by the Governor of the Kaluga Region, representatives of the city’s administration, figures of culture.
It is the second exhibition of the renowned master in Kaluga. The first one a year ago showcased Tsereteli’s enamels, sculptures and paintings dedicated to Tbilisi, his  native city. This time, a viewer has an opportunity to see his works inspired by  sunny Spain and executed with his characteristic energy, passion, plastic and vivid power.